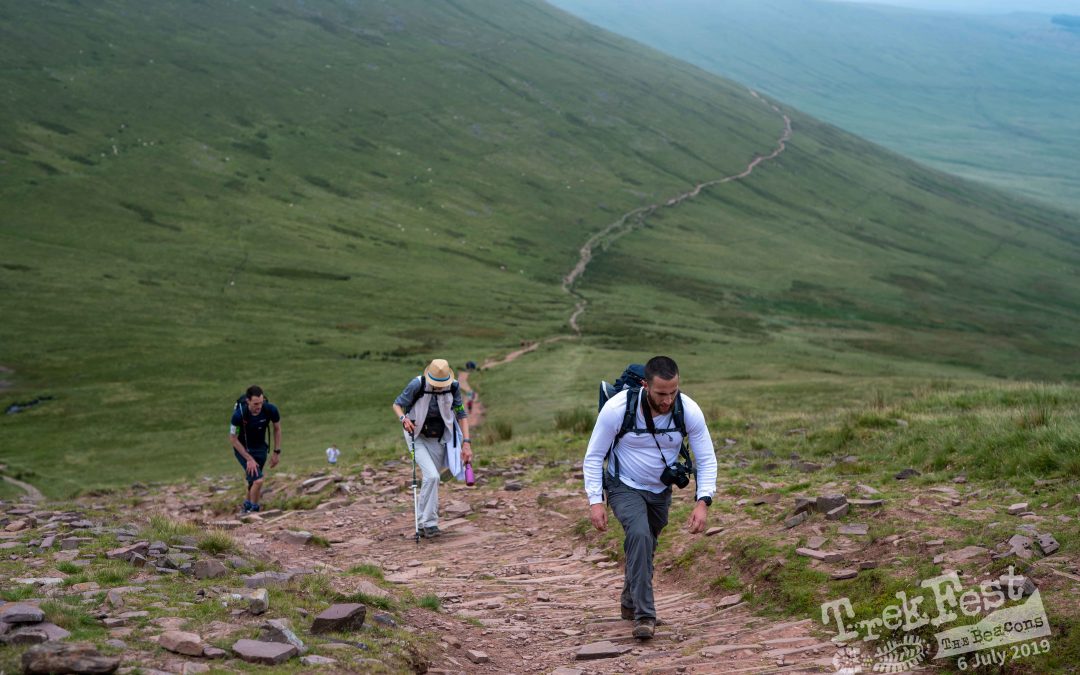 TrekFest participant, Daniel Eggington, recently conquered our TrekFest The Beacons challenge and is going on to take part in TrekFest The Peaks on Saturday 31 August – all in preparation for his solo expedition in Colombia!

Daniel took part in TrekFest The Beacons on Saturday 6 July 2019 along with two friends. Together they were raising funds for a new wheelchair for one of the team member’s nephews. More information on the teams fundraising journey can be found here – Harrison’s Lightweight Wheelchair.

Daniel has summarised his TrekFest experience for us here. For the full blog post, head over to Daniel’s page The Merchant Traveller.

Daniel and his team mates arrived at the TrekFest village at around 8pm on the Friday night; “We spent most of that night in the tepee bar; a brilliant social area where other walkers/runners would talk and learn about each other and their chosen charities.” The TrekFest Village is home to our chill out zone, TrekFest pub and a dedicated campsite for all of our participants. A fantastic place to soak up the pre and post event atmosphere!

The 50km trekking challenge then started at 7am. 3, 2, 1 and they were off! It was 11km until the first checkpoint; “The majority of the walk so far was on the banks of the River Usk – grey herons were along the river with a few more species from wrens to goldcrest which I caught a glimpse of.”

The team made it to their first checkpoint. The refreshments were a welcome sight! “Water and snacks waited for us; from fruits to flapjacks to glucose drinks!”

It was then onto the next checkpoint, a further 17km on. The boys continued and kept each other’s motivation levels high as they explored the beautiful Brecon Beacons National Park. On arrival at Checkpoint 2, the 50km challengers received a well-deserved hot meal – “the food provided was not what I expected. I would have imagined basic warm food, but the food felt like it had come out the back of a 5-star hotel kitchen!”

After spending 45minutes resting, fixing blisters and refuelling, Daniel and his team continued along the next section of the route. A much steeper section, including summiting South Wales’ highest peak – Pen y Fan (672m). The team took on the trail, alongside the pine forest, gradually getting steeper and steeper until the path opened up with incredible views of Corn Du and Pen y Fan. “This part was the hardest part of the trek, on already tired legs and burning much more calories than I had eaten it was difficult. More water stops were needed, with lots of people willing me on!”

They made it to the summit!

Daniel spent just 10 minutes at the top, enough time to take in the scenes, without seizing up. It was then a small incline to Corn Du before starting their decent. “I felt I had completed it! We all sighed in relief – no more climbing or ascending!”

“After the steep ascent it was then primarily through farmers’ fields and country roads. Which suited us and the faster pace we wanted to go as to make our time up as much as possible.” With the third and final checkpoint coming up, Daniel felt a surge of motivation; “spirits lifted in our team and the people around us – we got to the checkpoint and there was a nice setup of Gatorade, flapjacks, fruits and water refilling tubs.”

It was then time to complete the final section of the challenge and push on to the finish line! “We continued at our pace and tried entertaining each other – we would listen to music or sing a song. We were in good spirits – we all agreed what we had already done was a great achievement.”

“This was now the home straight – we began picking up the pace and ran 200 metres, walked 200 and so on for the remainder of the miles. We had entered Brecon village; I had recognised some of the pubs and garages of my past trips to Brecon.”

The finish was then in sight! The team’s supporters cheered them on across the finish line, where a medal, finishers t-shirt and glass of bubbly was waiting for them. Daniel finished 24th out of the 300+ 50km participants, with a finish time under 10 hours (9 hours 48 minutes) – what an amazing achievement!

“With the money raised for the cause mentioned earlier, we were all proud of ourselves and thanks to Global Adventure Challenges for the food and an event organised so well. So, if anyone would like to take part in any kind of event in the UK or overseas these are your go-to guys.”

A massive WELL DONE Daniel! And well done for raising a huge amount of money for Harrison’s Lightweight Wheelchair. We can’t wait to see you again at TrekFest The Peaks on Saturday 31 August!